The Contract for Difference is the flagship scheme supporting Great Britain’s transition to Net Zero by 2050, enabling affordable and diverse low carbon generation. The scheme is administered by the Low Carbon Contracts Company (LCCC), an arm’s-length body wholly owned by the secretary of state for BEIS.
The CfD is designed so that generators are paid by LCCC when their strike price is higher than the market reference price and they pay LCCC when the market reference price exceeds the strike price. The scheme protects generators against exposure to market price volatility, but also suppliers when market prices are very high. The generator is guaranteed a fixed price for the electricity produced over the course of the contract, reducing the financing cost of the project1. On the other hand, when market reference prices increase, the CfD payments collected from suppliers are decreasing and eventually becoming negative when the market price is higher than strike prices.

The CfD scheme is funded through a levy paid by electricity suppliers, based on their eligible demand. The Interim Levy Rate (ILR) is set by LCCC a quarter in advance and the payments are reconciled at the end of each quarter. In addition to the ILR, suppliers are also liable for the Total Reserve Amount (TRA), a lump sum paid at the beginning of each quarter and set probabilistically at the P95 level (allowing LCCC to be able to cover the CfD payments in 19 out of 20 cases).

On the other hand, baseload generators, which are paid based on the Baseload Market Reference Price (BMRP), show a different dynamic. The BMRP is fixed in advance for each season (Summer – April to September and Winter – October to March) and therefore the payments made to baseload generators will not be impacted by the volatility of IMRP. In fact, for an entire season, a baseload generator will get the same payment top-up for its generation on a £/MWh basis: the difference between the strike price and the BMRP. In the case that the BMRP exceeds the strike price, the generator will pay the difference to LCCC for all the generation within the season.

The recovery from the pandemic has prompted an increase in economic activity around the globe. This has increased the demand for gas, driving up the day ahead and seasonal market price. As gas fired power plants set the marginal price in GB, power price has followed a similar trajectory. 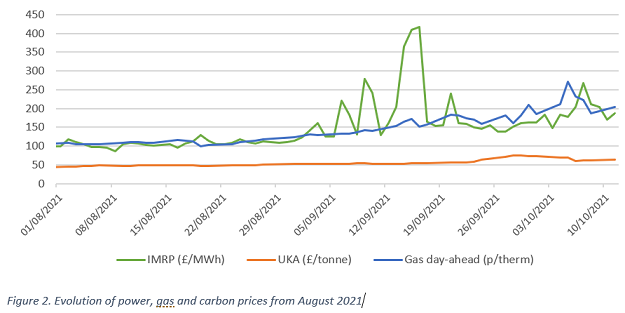 So far, a total capacity of operating under the CfD is just over 6GW, split between baseload (~1.1GW) and intermittent generators (~4.9GW). Over time, the weighted average strike price (WASP) of allocation rounds has decreased, from just under £170/MWh for the investment contracts (IC), to £48.33/MWh in AR3 (£2021 prices). Figure 3 below illustrates the payments that would have to be made by a representative generator for each allocation round, during a period of high IMRP. 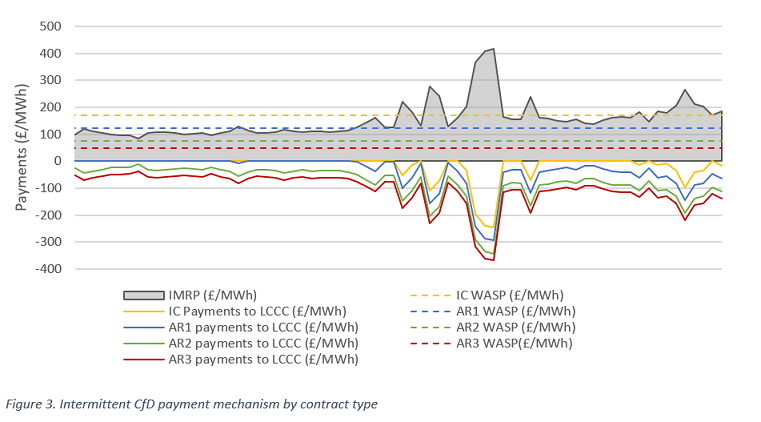 For context, the figure below shows the current intermittent capacity in each allocation round, broken down between currently operational and not operational yet. 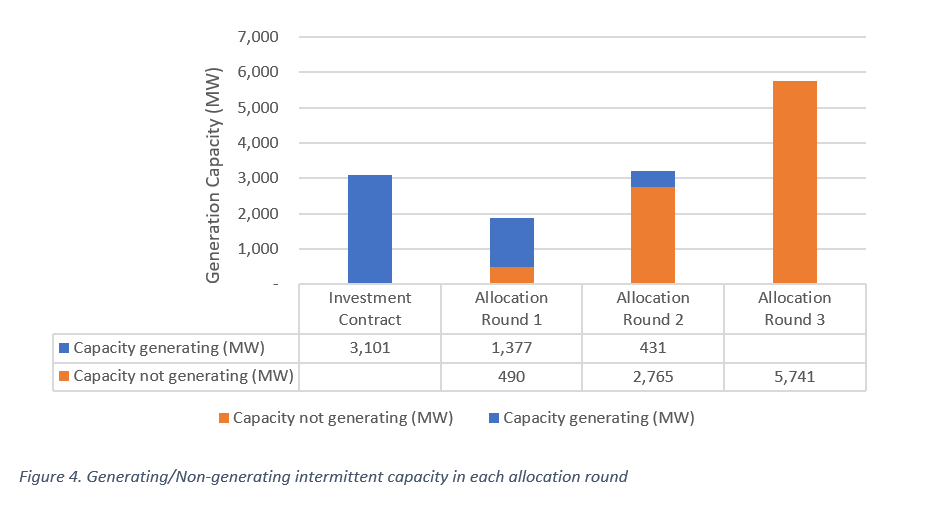 Looking back at 2021 so far, we have seen CfD payments decreasing significantly, month by month. On one hand, payments to intermittent generators have decreased due to the increase in market prices, as well as low wind generation. On the other hand, baseload prices have been stable until July, with a steep decrease in August, due to outages. Figure 5 shows the monthly CfD payments since the start of 2021, broken down in baseload and intermittent generators. 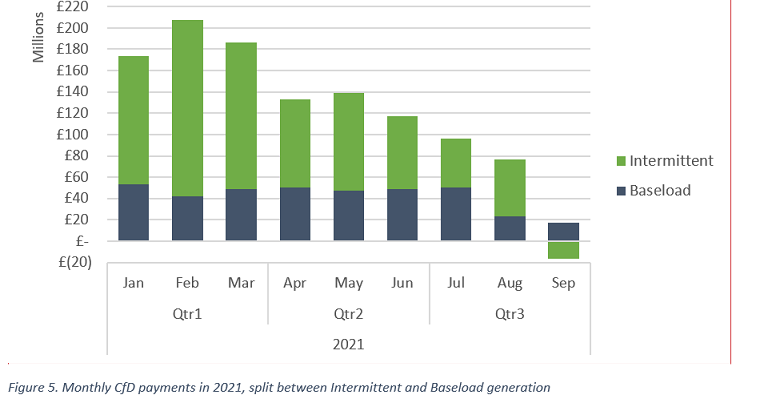 With CfD payments dropping, it became clear that no further Interim Levy Rate (ILR) collection would be required for Q3 2021. As a result, LCCC has set the ILR to £0/MWh from the 14th of September, reducing the burden on suppliers.

Due to very high day-ahead market prices and very low wind generation, the CfD payments for intermittent generators during September have even turned negative. September 2021 also marked the first day of net negative payments, across both intermittent and baseload generation (6th of September), as well as the first period of 7 consecutive days of net negative payments (8-14th of September). Despite this, due to positive payments to baseload generators, which were slightly higher in magnitude, overall payments for September still outturned positive, at just over £0.8m . This amount is subject to change with further settlement runs.

The initial forecast for Q4 21, published in at the end of June 2021, estimated the total payments at £494m, which translated into an ILR of £6.494/MWh. The rapid increase in market prices over the past three months has led to significant swing in the forecast CfD payments for Q4 21.  A week prior to the start of Q4, the payments were estimated at -£19.75m, which prompted LCCC to set the ILR for Q4 21 at £0/MWh. The Total Reserve Amount (TRA), however, was kept at the level set in June 21, due to the increased magnitude and volatility of prices. Overall, compared to the initial forecast, the projected payments for Q4 have swung by nearly £1bn . 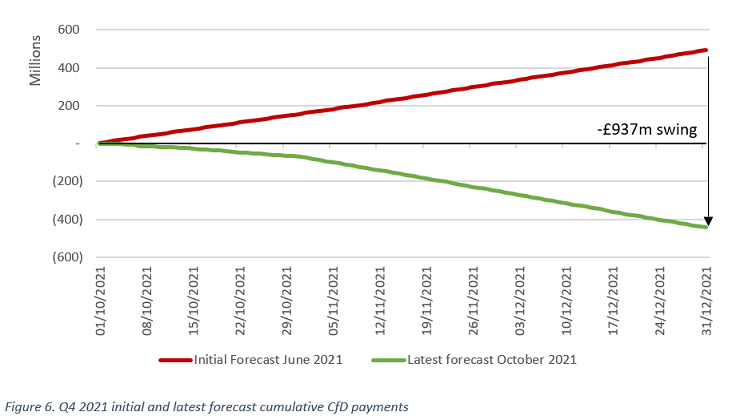 As previously explained, payments to baseload CfD generators are based on the BMRP, which is set in advance for each season. For Winter 2021, the BMRP was set at £102.45/MWh, which is higher than the strike price for only 4% of the operating CfD baseload generation capacity. This means that LCCC will make net positive payments to baseload generators for the entire Winter 2021 season.

If market prices remain at the current levels throughout Q4, LCCC will continue being paid by CfD generators, while not collecting any payments from suppliers, due to the ILR being set at £0/MWh. Any amount collected from generators will then be reconciled on the 19th of January, after netting off the TRA for Q1 22, currently set at £303m. 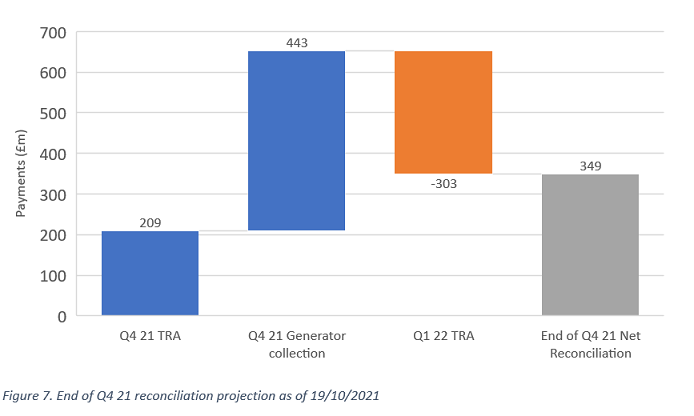 Under the current market conditions, the CfD scheme is a net negative cost for suppliers, which helps them offset high electricity wholesale costs. This ought to soften the impact of the current crisis on consumers, though the effect will be small given the very high wholesale prices. Any amount collected from generators is used towards the following quarter’s TRA, with the remainder being returned to suppliers as a lump sum. Due to its mechanics, therefore, the CfD scheme not only acts as a hedge for generators against low market prices, but also as a hedge for suppliers against high market prices. With more CfD generation capacity in the pipeline, which has lower strike prices, the effect of the CfD payment mechanism will increase proportionally, contributing towards stabilising the costs of the electricity system and making energy bills more affordable for end-consumers.