In the current market, where wholesale gas and electricity prices have been high and volatile, LCCC has been receiving a lot of interest in how much money CfD generators have been returning to LCCC. These questions are usually followed up by variations on “how will the money get to me?” This blog addresses the current situation of LCCC’s money flows in an attempt to clarify these points.

Firstly, there is the question of how much income LCCC has received. We calculate the amounts that each generator owes from the difference between the relevant reference price (for variable generators like wind this is the day-ahead price for each hour) and the project’s strike price, multiplied by the generation in the period. This is then invoiced and settled, with the cash accumulating in the LCCC account until the regular quarterly reconciliation run, when it is paid out to suppliers in proportion to their market share.

LCCC does not have a mechanism to pay suppliers in between these quarterly runs. In ‘normal’ times, LCCC collects money from suppliers on a daily basis in order to pay generators their top-up payments. This is done through a charge called the Interim Levy Rate (ILR). The regulations governing our levy powers do not allow us to set an ILR of less than zero, so the only means we have to return money is the quarterly reconciliation. The ILR has been set to £0/MWh since September 2021 and should remain there until at least September 2022.

The amounts returned to suppliers in the reconciliation runs at the end of those two periods varied from these figures for a number of reasons:

Additionally, suppliers will see a net change in the Total Reserve Amount (TRA) required by LCCC from suppliers as a buffer. The TRA normally helps to provide reassurance that the company will have enough money to make CfD generator payments on time to generators. The TRA is the amount that, in the calculation of the company, is needed in order for there to be a 19 in 20 probability of it being able to make all the payments required to be made to CfD generators during the relevant quarter, taking into account forecasting uncertainties such as electricity prices, variable wind speeds and demand. In the current environment especially, where generators are paying LCCC, the TRA protects LCCC from prices collapsing unexpectedly.

A first approximation of what suppliers will see at the end of each quarter is therefore the accrued generator payments net of the difference between the levels of TRA in the quarter just finished and the one just starting. This is illustrated in the waterfall graph below for the last two quarters.

In Q4 2021, the TRA was £209.0m, while for Q1 2022 it was £303.4m, so there was a net call on suppliers of £94.4m, leading to an overall position of £39.3m due to suppliers. When moving into Q2 2022, however, the movement in TRA was the other way, with the amount originally set for the period being £233.3m, a difference of £70.1m in suppliers’ favour, and a before-period adjustment of the TRA for Q2 2022 further reduced it to £100m, increasing the net payment to suppliers by a further £133.3m. Combined with the £138.6m of accrued payments, a total of £342.0m was thus owed to suppliers at the end of Q1. Yesterday announced an in-period adjustment of the TRA, increasing it by £50m, to respond to volatility in the market and the recent run of lower market prices, but the past quarter has still seen a net payment to suppliers that should be very welcome. 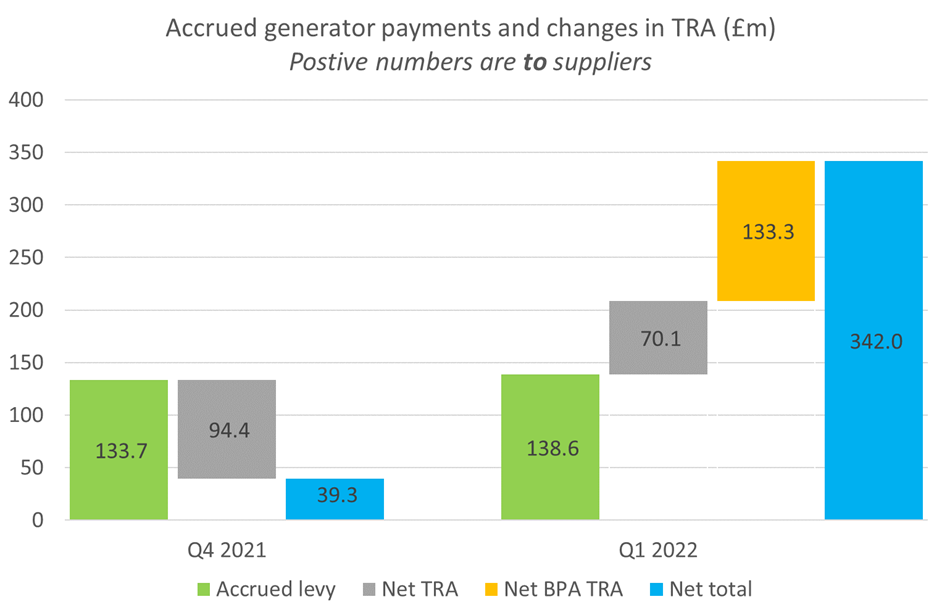 At this point the role of LCCC ends – when we need to pay generators we impose a levy on suppliers, and when generators pay us, we send that money to suppliers. What suppliers do with that cash is up to them. Eventually one should expect the operation of market competition to lead to lower retail prices as a result of payments from LCCC, but at the moment domestic prices are essentially set by the price cap calculated by Ofgem. The regulator does take the two-way nature of the CfD into account when setting the cap, however, and prices in this period are therefore slightly lower than they would have been otherwise.

Further data on income from generators and other data around the CfD can be found on our data dashboards and particularly the CfD Historical dashboard.